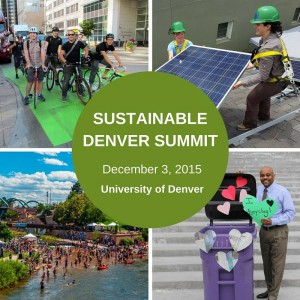 mmunity service I chose to volunteer at the Summit. My actual volunteer task was to sign in participants to the summit, which included people from different departments in the city, owners of alternative energy companies, interested citizens, college students, and many others. The summit was actually completely sold out and at capacity.

As a bonus to volunteering I was also able to attend the parts of the summit including the Keynote speaker Majora Carter who transformed her neighborhood of the South Bronx through building a park and providing job opportunities to youth within her neighborhood in software testing. She had a great perspective on gentrification, which is becoming a larger issue in Denver and other urban areas across the country. Gentrification is essentially when a urban neighborhood becomes more desirable and often the original residents are priced out of their commu 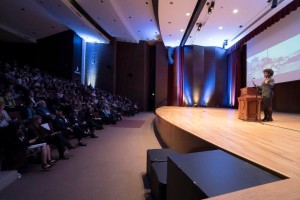 nity. This increasingly happening in Denver and other urban areas across the country. Many people are fully opposed to gentrification and want it stopped. However, Majora Carter’s position was that we need to find ways to gentrify neighborhoods without displacing the original residents. This is the work that she is currently doing by creating a company that hires the local residents of the neighborhood to do software testing, which is in demand. These higher paying opportunities allow the current residents to be able to continue to afford their gentrifying neighborhood and enjoy the benefits of gentrification.

In addition to the keynote speaker I was also able to participate in the water breakout discussion (they did not have a breakout on food issues). The main part of the summit was broken into a few groups (water, energy, materials, mobility) discussing ways that different organizations, government departments, and companies that can make pledges to increase the sustainability of Denver in each area. Before going into this breakout session I did not know as much as I would have liked about water issues. However, I quickly learned the complexity of water in an urban area. Not only is it a challenge managing the water that needs to be available through water faucets throughout the city, but we also much manage the streams and rivers that flow through the city. These issues feel massive and intractable, but the people in the room seem to be pulling together a plan to deal with all the intricacies. I cannot wait for the next summit to see the progress and developments across and ever growing city.

(Photo credits to the Office of Sustainability)