One day after work, I was sitting on the couch looking at all these videos about the DAPL protestors (water protectors).  I felt something in me, a need to be with them. The people on these videos, they are my relatives. All are a part of the Oceti Sakowin – the seven council fires of the Lakota, Dakota, and Nakota people.  I felt that it was a responsibility for me to go to Cannonball, ND, and help protest. I started to ask around to see if anyone was going up North. Then my leksi (uncle) Greg GreyCloud told me that he was going to Cannonball and said I could ride with him. Without hesitating, I took his offer; I was ecstatic. I told my parents and they approved.

The day before we were going to make the trip, I was anxious, I wanted to be in that atmosphere of people so bad.  We were set to leave at 4 the next morning, so I decided to stay up all night until we left. Greg told me he had another nephew from Crow Creek coming with us who also wanted to stay up all night, so I went and picked him up so we could hangout.  We stayed up and played basketball until 3 am, until some rain forced us inside.

4 am came and we packed up and headed to the Tribal Horse Ranch to get some horses (If you are going to be a warrior you need horses). Another group of relatives were going to caravan and ride horses with us, so we met up with them and put their horses with ours. Around 5:30, the sun was barely coming up. We had finally set off on our Journey. I told Greg to wake me up when we got to the next gas station, but I ended up sleeping until we got to Cannonball.

We had arrived at the spirit camp and were looking for a place to put the horse trailer. After we found a spot, we took out the horses to walk around and drink some water. I had no idea what I had gotten myself into. Greg pulled out the regalia for the horses and put it on them. They looked like war horses from the 1800’s. All of us riders starting mounted up, and we started riding along the highway and were headed to the barricade; aka the front line. As soon as we got there we heard all kinds of war cries and a lot of people shouting. They were happy to see us. We had a meeting with the elders there, and we all set up a game plan of what was going to go down. We were going to introduce ourselves in our traditional way, the way our ancestors had done.  Which was to line up straight across from whoever they were introducing themselves to, while singing songs. Then they would all circle up for a while, then exit.The elders told us to keep in mind not to hurt any of the police officers because they were not the enemy.

All of the riders there had gotten in a big line. I was nervous all the way up until this point, but suddenly, it felt like a switch in me was hit – I wasn’t nervous anymore. There was a loud “HOKA,” our signal. We started to trot on our horses in a single file line until we got to the police line. We were told to line up across from the police.  When we got there, it was a stare off for a couple of minutes. Then it got exciting. All of us starting moving towards the police officers, pushing them back about 100 feet. Then we made a big circle in front of them. We started moving in that circle, like a roundance. All I heard was people war crying, people singing, the hooves of the horses hitting the pavement of the highway. For 10 minutes we rode like this, the horses mimicking their riders, acting wild and fearless. The horse I was riding was calm because I was. I just sat on my horse and we stood there, staring at the officers. My leksi Greg had his coup stick and was counting coup on the police ( the act of hitting the officers, he did not really hit anyone) It was truly an amazing experience. When we were done introducing ourselves we took off in a single file line, the same as we came. The rest of the time we were there people wanted to talk to us, give us stuff, and take pictures of the horses.  I feel like it gave most of the people there hope.

(Below: Me on my horse Kola)

Since then I have felt like I did a great deed. Especially for the Earth. I later learned that the video of what the other riders and I did went viral. It was on Buzzfeed, and we made the New York Times, front page. Now-a-days there are all kinds of people from all over the country, all over the world, showing up to protect the water. They are facing very harsh conditions, but they are not stopping. As a young man, it is very inspiring to not only see my nation, the Oceti Sakowin, but people from all over the world come together. I hope the DAPL is stopped so we can have clean water for generations to come

( Greg and I are the two furthest to the right) 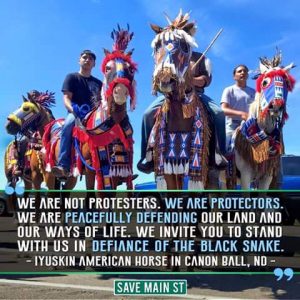