For my community service time I chose to work with Habitat for Humanity in Denver. This was a great organization to work with because while I helped build homes for people I was also able to learn some very useful skills from some amazing people. At first it was a little frightening to know that I would be working with dangerous tools or to be working up on ladders. The supervisor that I had was really great and made sure that we never did anything that we were uncomfortable doing and that was really reassuring to me. Many of the volunteers on the site were there through their own company time because the company that they worked for either sponsored or donated a large sum of money to Habitat for Humanity. Some of the other volunteers there were people that were going to be moving into one of the homes built because they are required to give a total of 100 hours of volunteer time to receive help. One of the things that really stuck out to me was their phrase of giving a hand up, not a hand out. I thought this was great because by doing that, they are able to help even more people than if they were just giving away homes. The major difference was that the homes they were building don’t have an interest rate on their mortgages. This was such a great organization to work with that I would definitely like to do it again and look forward to becoming a regular volunteer with them. 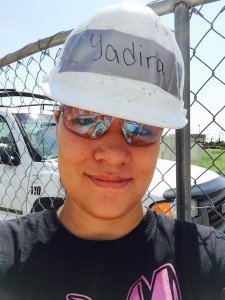 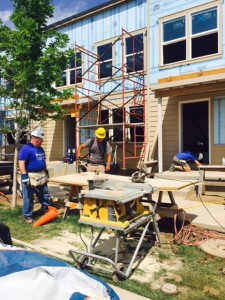