You know the common saying we’ve all heard hundreds of times, “Where the road ends and the Wild West begins.”  Well I tweaked that saying just by one word to apply it to the exploring my community exercise.

So now I say to you follow me on this 250-word journey of, “Where the pavement ends and the Wild West begins.” 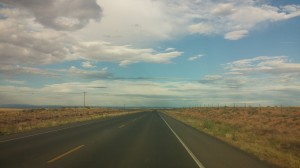 For the duration of this internship I am in Albuquerque, New Mexico.  However, the community I associate myself with is a couple hours east of Albuquerque located on the Navajo Nation.  Although the distance may be only a couple hours away the lifestyles in these two places are like night and day.  Albuquerque is the largest city in New Mexico and is like your average American city with all the hustle and bustle.  The city is growing so much that it’s getting somewhat more difficult to see the stars from where I’m living at near downtown. 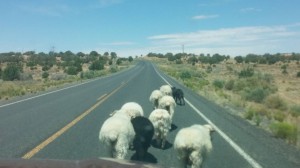 I’m not use to being in a city lifestyle setting so whenever I get the chance to go back home to the Navajo Nation I am excited.  That was the case when I traveled home over 4th of July weekend.  I got on Interstate 40 westbound and drove.  When I turned the radio station to our tribal radio station KTNN 660 am and heard the announcer speaking Navajo I knew I was almost home. 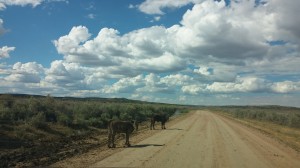 Just listening to KTNN provided a sense of place for me because I could imagine the thousands of Navajos across the Navajo Nation listening to the same thing.  Listening to the language being spoken was like a bridge connecting us back to the vibrant history we have as Indigenous people.  As I got even closer to home the presence of livestock on the road became common.  The cattle, mustangs, and sheep were roaming freely.  Far off in the distant I could see various windmills painted up with local modern art in the form of graffiti stating, “Tó éí ííná,” meaning Water is Life.  The Water is Life statement written on the windmills was a form of advocacy concerning the water rights up in question in relation to the natural resource extraction and proposed contracts with larger cities to take water from the Navajo Nation.

As the tires of my 4×4 Jeep hit the dirt road I knew I was minutes from being home.  Upon my arrival home the days that followed were filled with long lasting memories.  Those memories were in the form of songs, food, stories, jokes, greetings, and conversations.  By the time it was time for me to come back to Albuquerque I was once again rejuvenated to be away from home once again until my next trip back.