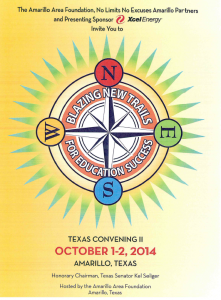 The missions and projects of the Amarillo Area Foundation are not limited to the city of Amarillo. The organization addresses needs across the Panhandle Region and in this instance, across the state of Texas. In October of 2014, the Second Texas Convening was organized by the Amarillo Area Foundation. Held at Polk Street Methodist Church and generously sponsored by Xcel Energy, the Second Texas Convening strove to meet the following 5 goals:

(as printed in the Convening’s program)

4. Showcase the work of postsecondary programs by identifying collaborative efforts that have achieved a substantial impact on education and workforce initiatives and could be replicated for large-scale impact.

5. Create a collaborative networking and communication structure to build on and leverage major funders’ investments in Texas through additional funding and expanded social capital for long-term sustainability.

The Texas Convening accomplished these goals by bringing together over 200 community leaders from across the state to present information and ideas in accordance with this agenda. The event thus became a valuable venue for discussion and initiate of action for community development and interaction with education.

My role with the Convening was small, but still important. My primary job was keeping a detailed list of attendees and insure that out of town visitors were provided transportation to and from the airport, venue, and hotel rooms. I also put together name-tags for all of the attendees. These jobs were not glamorous, nor did they require much critical thinking or problem solving. What they did require was that I develop –quickly—a working knowledge of Microsoft Access along with a consistent and reliable method of recording keeping. These were two skills I previously lacked. 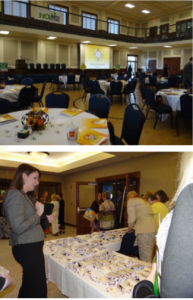 In addition to the hands-on skills I learned, I also learned a great deal concerning professional conduct. From business attire to proper decorum, observing the ladies and gentlemen who attended this event and the ways in which the interacted with each other was a lesson in itself.