The Journey and More: August News

My “Coast to Coast” Journey

OC’s outreach territory covers most of 8 Great Plains states…it’s like a country within a country!  I had the privilege of traveling from the south end to the northern edge of the Ogallala Aquifer on a 1,900 mile trip early this month with an OC group. This journey was filled with work, storytelling, meeting new people, and adventure. Our main purpose was to support and bolster OC interns on the Pine Ridge Reservation in South Dakota, and to network with other people along the way.

First, we traveled through the Oklahoma Panhandle up through Kansas, stopping to view some of OC Board Member Simone Elder’s work in Wichita County.

We spent the night and next morning in Atwood, KS, learning a great deal from OC Adviser Chris Sramek and OC Board Member Dawn Hampton. I loved seeing the community development achievements in Atwood that Ogallala Commons has assisted with during the past 10 years.

Next on our northward route was a meeting with Russ Finch near Alliance, Nebraska. We witnessed his geothermal greenhouse and business, Greenhouse in the Snow. I was in awe of the variety of fruits and vegetables he was producing, but also with their quality.

The next day we drove up from Chadron, Nebraska to see Crazy Horse Monument and Mount Rushmore (near Custer, SD), and I got to see my first wild American Bison in Wind Cave National Park. I was able to witness history in a way that I had never experienced before, and the landscapes of the Black Hills of South Dakota were breathtaking. 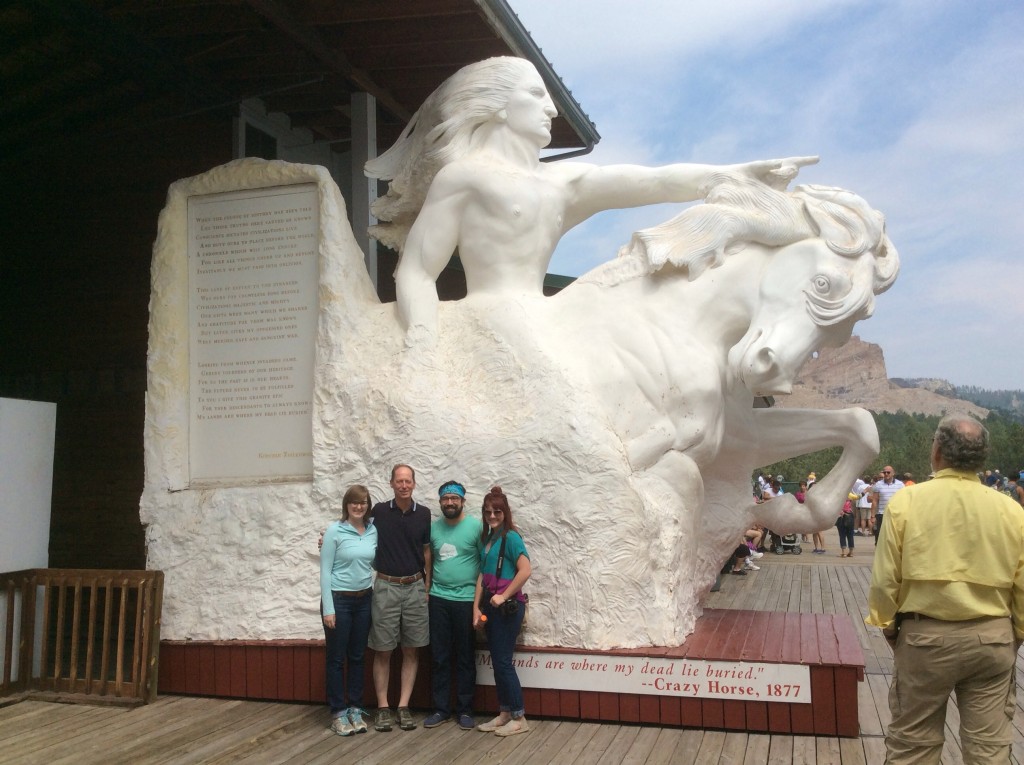 On the third morning, we traveled to the Tribal Council meeting up on the Pine Ridge Reservation where two OC interns, Francine Richards and Tasina Lone Elk conducted their harvesting ceremony. These two girls are an inspiration to youth in their communities, and I am glad that the Oglala Sioux Tribal leaders were able to learn about their accomplishments. Next, we visited the Emergency Youth Shelter in Pine Ridge, SD that Pauletta Red Willow started and manages for the reservation. After lunch, the interns took us on a driving tour of the reservation, and our first stop was the site of the Wounded Knee Massacre. Without Francine and Tasina as guides, we wouldn’t have understood the huge significance of the cemetery. I am very grateful for the wisdom they passed on to us. We also visited radio station KILI, which broadcasts from the highest point on the reservation, and is an essential source of community news and information. We finished the day at the Oyate Teca Youth Center and its community gardens in Kyle, SD, where we helped with some weeding, and spent time with Intern Supervisor Steve Hernandez.

The next day we met Steve at the Rosebud Reservation and talked with the South Dakota State University Extension personnel in Mission, SD, regarding their outreach and education programs, and then toured Sinte Gleska University community gardens, guided by tribal member and manager Carmelita Sully.  Carmelita provides education and nutritious food to her Native community, and OC hopes to collaborate with her to create some internships in 2016.

On the sixth day of our trip, we started back south to Texas, stopping in Larned, KS to stay with OC Board Member Tom Giessel and his wife, Sheryl. That evening, we enjoyed a wonderful meal prepared by OC Apprentice Beto Rincon, who made the journey, along with OC intern Britt Snipes, OC Board Member Dr. Paul Martin, and OC Director Darryl Birkenfeld. The trip finished on the seventh day when we returned the rental van in Amarillo, TX, and our fellow travelers went their separate ways.

Now that I am home from this epic journey, I am reflecting on what I learned and how the journey has changed me. I love my work with Ogallala Commons even more, because I got to witness firsthand how OC interns are making positive change in their communities.

With recent grants from new funding partners in Colorado and Texas, OC is currently gearing up to conduct five YEDs for more than 400 high school students during the fall semester. These half-day gatherings help students to connect to their “E-Dreams” and to learn about entrepreneurial skills and career options that can create pathways back to their hometowns or regions. The YEDs also convey a vital message to youth: “Your hometown and region need you and we invite you to consider coming back!” Other key features of the YED are the young entrepreneur panel, speed career exploration, and learning about next steps like Youth Entrepreneur Fairs and OC Community Internships.  In 2015, a total of nine OC Community Interns applied to and were accepted into our program after attending YEDs some months earlier.

As a result of a $49,821 grant from the Daniels Fund, Ogallala Commons and its partners are launching a youth engagement project for seven counties of southeast Colorado (Baca, Bent, Crowley, Cheyenne, Kiowa, Otero, and Prowers). Phase I of this project will include partner building and two Community Champions Workshops, and will culminate in two YEDs: one at Lamar Community College on Nov. 17th, and another YED at Otero Jr. College in La Junta, CO, on Nov. 18th.

“Across the state – and in fact, across the nation – we are finding that after high school or college, many youth wish to return to their home communities,” said Julie Worley of the Rural Economic Developer and Project Implementation Team based in Rocky Ford, Colorado.

The Daniels Fund, established by cable television pioneer, Bill Daniels, is a private charitable foundation dedicated to making life better for the people of Colorado, New Mexico, Utah, and Wyoming, through its grant program, scholarship program, and ethics initiative.

Additionally, through collaborations with other partners, OC will conduct YEDs at West Texas A&M University in Canyon, TX on September 16th, at Floydada, TX on Oct. 7th, and at Clovis, NM on Nov. 4th.

Dawn Hampton is a Great Plains girl, and has been for most of her life. A resident of Atwood, Kansas, Dawn, an accountant, and her husband, Jim–a pharmacist–are the owners of Currier Drug, Inc. and Bison Rx Compounding and Therapy. Dawn is also an active member of OC’s Board.

Dawn and Jim found their way to a rural community after Jim grew tired of working for a chain pharmaceutical company. They wanted to own their own business, and after looking at the options, Dawn said they “knew a smaller community was a better option for our family.” They discovered the Atwood area through a college friend, and the rest is history.

Dawn’s passion for small towns is evident when she talks about how she connected with Ogallala Commons. When the Hamptons moved to Atwood, the county had a population just over 3,000 and it was declining. Dawn wondered what they had done with their move, because as a Great Plains native, she’s seen a number of small towns fading into history. That didn’t stop them, however, and Dawn says she often thought “someone out there has to have a solution!”

Around 11 years ago, a group of people in Dawn’s hometown found a solution in the form of a newspaper article about an event in Burlington, CO (OC’s Leadership Summit in August 2004). Dawn and others got together and went to the event, where they met Ogallala Commons and began forming a partnership that has led to many benefits for their community, Ogallala Commons, and Dawn personally. Dawn loves going to other OC partner communities to see what they are doing, and OC provides encouragement for what can sometimes be a thankless job of running a business in a rural community.

“Rural communities are just as important as urban ones,” Dawn says, “We put food on people’s plates… and [Jim and I] are providing healthcare, part of that cog of keeping our community healthy.”