Recently, the Amarillo Area Foundation reevaluated the school districts which determine what students are eligible for the ACE Scholarship program. They discovered that several elementary schools that feed to Tascosa High School met the 85% mark for free and reduced lunches. As a result, it was determined that Tascosa High School would be incorporated into the ACE Scholarship program along with Palo Duro and Caprock High Schools. This assimilation requires an additional two-million dollars be added to the ACE Scholarship Endowment Fund. As a result of this goal, I was able to witness fund-raising at its finest by those at the Amarillo Foundation! To help meet this goal, Charlotte Rhodes proposed a “Giving Day” close to the Thanksgiving Holiday that would celebrate the 20th anniversary of the ACE Scholarship Program and include the entire city of Amarillo. The event was a huge, but incredibly fun project to help work on. The ACE Giving Day was held on November 20, 2014 and was comprised of three major platforms: Penny Banks and Toot-N-Totem Locations, Online Giving, and the Civic Center.

A significant component of the ACE Giving Day was the introduction of online-giving platforms. “Text-to-Give” was the slogan, and while online giving wasn’t the predominant method of giving for this particular fundraiser, it’s appearance represents an important step for the development of philanthropy in the future. Larger cities like Dallas, Fort Worth, and Houston cite online gifts as their most prolific means of fund-raising. Although Amarillo isn’t anywhere near that mile-marker yet, the city is well on its way!

In the days leading up to the ACE Giving Day elementary schools across the city of Amarillo competed with each other to fill up their penny banks. It’s really touching to see young students participating in a fund-raising project that will ultimately help provide them with an opportunity for post-secondary education!

On the actual Day of Giving, 22 Toot-n-Totem Locations all over Amarillo were set up to take donations. Each of these locations was manned by shifts of two volunteers—with 5 shifts throughout the day, that makes for well over 200 volunteers! The majority of these volunteers were comprised of High School and College students all associated with the ACE Scholarship Program!

While volunteers were hard at work taking donations at the Toot-n-Totems throughout the day, there was a steady flow of events and entertainment at the Civic Center. Beginning at 8 a.m. children of all ages visited the Civic Center to both preform and participate. There were choirs, bands, dances, as well as games, crafts, donuts and a fire truck for the morning activities. At lunch time, there was a chili cook-off and a steak-eating contest sponsored by Amarillo’s famous Big Texan. The Evening finale included live music and a special dinner prepared by local student culinary classes.

In all, the ACE Giving Day raised $608,330! Additional contributions inspired by the events publicity has since exceeded $1 million. I learned so much from my time working on this project. Its sheet size required an attention to detail that was amazing to see enacted by leaders at the Amarillo Area Foundation and their corresponding teams and boards. This did not happen because of the work of a few people, it happened through the work and cooperation of many people, and it was very inspiring to see that communal relationship in action! As inspiring is the common goal everyone is working toward—equal opportunities for all citizens to achieve an education. 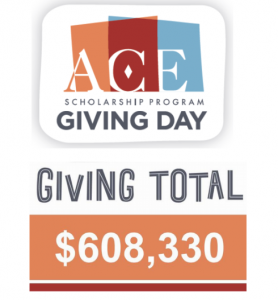