Public speaking used to be the most difficult thing for me. I would stare over the people I was speaking to, even if I knew them, and clam up. My words would get caught right under my jaw and become stale there. I’d stutter and stop.

It was through my 4-H that I started getting more comfortable, giving demonstrations and minor speeches until I grew more confident. Until I really actually liked speaking.

That doesn’t mean I wasn’t nervous when I was going through all the things to remember that Tuesday morning, muttering to myself in the car on the drive, memorizing numbers about the food bundles. The Prairie Developmental Center in Atwood, Kansas, was scheduled for 10:45, but we pulled in fifteen minutes early and I hitched a smile onto my face to cover nerves and walked in, my boyfriend following at my heels.

The first thing we did was met with Barbra, who had called me, asking me to come and to explain the Senior Market Program to everyone there, saying there were several eligible people there. Next, we walked down narrow halls, as she gave us a tour, showing us the back garden, the offices, and the room where all who attend the PDC get assigned a jobs that will better them and the community. When we reached the last turn of the hallway, I could tell we’d reached our spot. Someone had started leading everyone into that room some time before, while we were walking through the other parts of the building and getting the full tour. Now there were around thirty people seated around the room, waiting. A flash of those old nerves struck me, but I swallowed them down and beamed at everyone seated there.

We had planned to have a fifteen minute speech, thinking that was all that it’d take. Barbra and I had agreed that, at longest, it would take thirty. Forty five minutes later, we were still there, being asked questions about my brief overview of my past by some and passing around a signup sheet, getting as many names down as we could.  When the pen was finally put away, they asked if they could see a food bundle at our next delivery. “How about I bring by the first delivery now?” the excitement was palpable.

As, about 30 minutes later, we carried the last bag into Barbra’s office, I felt a swell of pride. There had been so many happy faces as we reentered and Barbra’s was certainly one of them. Her smile intensified as we opened a bundle to show her all of its content. By the time we left, I felt a pang that it was over. Bringing such happiness was an astounding thing to be able to do. It was something so small but felt so powerful. 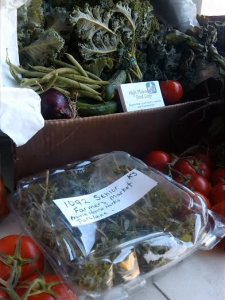 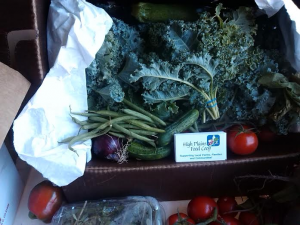