One reason I was very interested in an internship with Ogallala Commons is because I can do something that interests me. My major deals with video, audio, and editing. It’s hard for me to find an internship that deals with video editing, is within the Amarillo region, and pays. I am very fortunate to have received this opportunity to do what I love. My internship this summer consists of doing research and shooting video for Ogallala Commons. I’ll be traveling along the Ogallala region to see how folks are helping reduce depletion of the aquifer. The videos are for the Stewarding Our Aquifer Initiative – (http://stewardingouraquifer.com/ogallala-aquifer/) I have 9 stories from Lubbock to Nebraska. The stories include folks using rainwater harvesting systems, xeric landscaping and street water collecting systems. So far, it has been a learning experience. I’ve only met with one person so far, but I’ve already learned a lot. I met with Dave Stebbins of Amarillo, Tx who has four rainwater harvesting systems and lives off the grid. He also has his own renewable energy fan and solar panels for electricity. The gutters from his carport roof and house roof go to 1600 gL bins. The water for his house goes through a filtering process and then he uses it for laundry, drinking and bathing. His house is made up of 2,000 dirt filled tires filled with concrete and it took him 4 years to complete by himself. He says he likes not having to rely on anyone, which explains his independence off grid. One of the most interesting things I learned from our interview was how inner city folk can reduce depletion of the aquifer. He suggested people collect their rainwater with a bucket or barrel, and using the water for our plants. He told me that the rainwater is more acidic which helps the plants thrive more. Anyone can harvest rainwater! I’m looking forward to all the other interesting information from the rest of my stories, especially the xeric landscaping 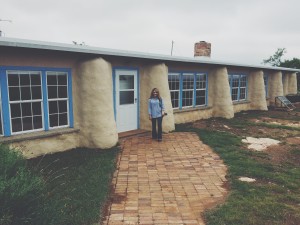 The picture above is me at Dave’s house! You can see here that those ‘pillars’ are tires. 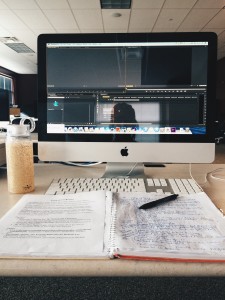 This is my work space. Fortunately, WT has Adobe Premier and DSLR cameras that I can use for filming and editing.