Although my internship is not quite over, it has still had successes, challenges, and failures. It has been a learning experience. I was not well-educated when it came to the Ogallala Aquifer before this internship. I knew it existed but I did not know about the depletion rate and its affect on people. Once I had my first interview with Dave Stebbins, I truly became passionate about water conservation. Interviewing Dave Stebbins was a great first story for the Stewarding Our Aquifer Initiative. Dave’s home ran completely off rainwater, a wind generator and solar panels. He drank, bathed, and irrigated his gardens all with collected rainwater. Prior to this interview, I did not realize harvesting rainwater was really a thing people did. So far I have interviewed a total of five people. I have interviewed people who harvest rainwater for their entire home, for greenhouses, and irrigation. I have an interview scheduled for this weekend in Lubbock, and next week I’ll be leaving for Kansas, Nebraska and South Dakota. I have never traveled to those three states before so I’m looking forward to it. Every story consists of an interview, which is my favorite part. I learn from every one. After each interview, I come back to Canyon and begin my video editing. It takes time to schedule the interviews and do the actual video editing. In between these times, I’m studying up on each person I interview and what their systems consist of. So far I have had more successes than failures. Normally my failures consist of camera malfunctions. My interview with Jim Whitten had to be recorded on my phone because the camera I rented from the school did not have a memory card. My interview with Dave Stebbins was cut short as well because the memory card ran out of storage. I had to re-interview James Cathy this summer because the camera was set up wrong the first go around. It could have been usable footage but I’m a perfectionist, so I could not settle with it. Sometimes my interviews were out of focus, and sometimes the people I interviewed were too quiet. I hate using the word failure but they were small, minor setbacks. However, I pressed on and got the job done. Every interview was full of new things to learn. I captured these moments so they could be shared with the public. That’s the best thing about this internship; bringing awareness to others. Overall I would say this internship has been a success. I have met fascinating people and worked alongside amazing people. Darryl was very helpful throughout this process and answered every question I had. Kade always helped keep me accountable and provided me with plenty of encouragement. My internship objective was to help bring awareness to those about the depletion of the Ogallala Aquifer with the Stewarding Our Aquifer Initiative. I think this internship taught me just as much along the way. I love telling people about my internship and all my interviews I have done. This started as just an internship but now it has turned into a passion. I have become an Ogallala advocate. 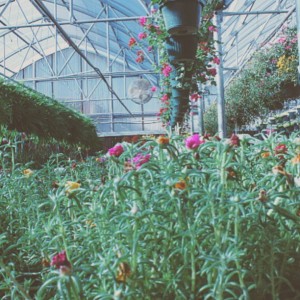 This is James Cathy’s greenhouse. One inch of rain equals 10,000 gallons of water for his plants! 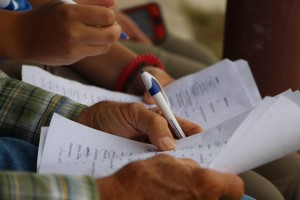 Along with interviewing Darryl about his Casa La Entereza, I took a tour of the playa by his house. 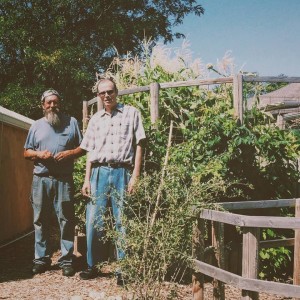 This is Don Rael, left, and Dr. Rolf Habersang. Rolf has dozens of fruits and vegetables and they are all watered with rainwater and street runoff water.