My contribution to A service that is truly needed i Seguin, texas 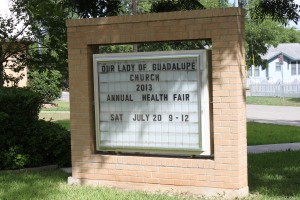 All of my community service hours this summer have been put towards the food bank located at Our Lady of Guadalupe Church for the second consecutive year. Last year, it was clear that this operation could use some improvements and this year it was even more so. This location seems to have maxed out their capacity and very  limited on volunteers. Since beginning to work with them, I have not only helped to assemble the bags and boxes of food but have also helped carry the groceries out to vehicles as well as been on pick-up duty once maybe twice a week from the Wal-Mart here in Seguin. More so than in any other volunteer situation, I genuinely feel as though each volunteer is absolutely vital to the operation each week. This reality has caused me to contemplate the state of the food bank and very motivated to work towards improving it moving forward.

When I was younger, I would volunteer from time to time working with various organizations, mostly because I was involved with so much in the community that doing community service was commonplace.  Truthfully, I never truly understood the impact that I was actually making by volunteering because I didn’t understand WHO I was serving by doing so. I knew that I didn’t necessarily know the people personally and so, really, what difference was I making?  This was my mentality at the time.

While living in Pittsburgh, I volunteered often at the food bank which not only served Pittsburgh but also the surrounding communities. Now, it could be that this was a volunteer opportunity that had to do with one of the major necessities of life (food), but for whatever reason, volunteering this time around took on a different significance for me. I didn’t know these people, and yet, I hoped I could have done more for them every time I saw these people coming through the lines to collect their donations. Being at the food bank in Pittsburgh really got me energized even more to work on the problems of our food system; one being the dependency of cities on emergency food assistance as a cure all to hunger and lack of food security.

In closing, I also wanted to mention that another exciting aspect of my community service this summer has been seeing former OC intern Thomas Schroeder, who is currently managing Texas State University’s student farm in San Marcos. The food bank has been very fortunate to have received the surplus vegetables which we have been distributing to food bank clients. Unfortunately it is very rare for that food bank to get fresh produce, so we are very thankful for this! May good things continue happening with the food banks in Seguin, Texas!!

Thomas Schroeder, current manager of Texas State’s student garden located on the Freeman Ranch in San Marcos, Texas and Ricardo Guerra, Ogallala Commons Apprentice supervisor and president of LULAC 682 in Seguin enjoy the site of over 100 lbs of fresh produce that Thomas delivered to the food bank located at Our Lady of Guadalupe Catholic Church in Seguin.