The Water Problem: What Makes the Difference? 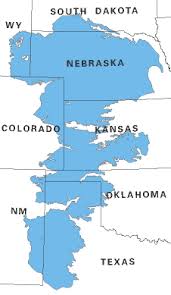 The net overdraft rate / net rate of groundwater mining is 54.864 mm/year across the entire aquifer. On average 21.59 mm/year is recharged into the aquifer. The playa lakes provide an important additional source of water for the Ogallala Aquifer, especially in the Southern High Plains. This is because of the small amounts of rainfall in our region; the Playa Lakes are the main source of recharge for the aquifer here. Recharge is mainly through precipitation in the spring and summer months and a small percentage of the rainfall actually reaches the aquifer. The main barrier of recharging the Ogallala Aquifer is the lack of permeability of the soil. In regions, like our own, that are very arid, high evaporation rates prevent the recharge of the aquifer.

Where the Water Goes

In Texas, groundwater is considered a public resource. If the water is beneath the landowner’s property; they are the right to capture it. This is called the Rule of Capture. The Texas Supreme Court first adopted the Rule-of-Capture in 1904. The landowner owns not only the water that emerges from the ground, but the water in place underground as well. The landowner has the right to pump as much water as he wishes even at the expense of his neighbor. Under the Rule of Capture, a landowner needs no permit to drill a well and pump groundwater, and he may pump as much water as he may beneficially use even if that causes his neighbor’s well to go dry. The Landowner also has the right to sell the water withdrawn from the ground for use at any location. The State of Texas created Ground Water Conservation Districts in 1947 to maintain a balance between protecting the rights of private landowners and the responsibility to protect the water resource. The first district was created in 1951, the High Plains Underground Water Conservation District.

The High Plains Underground Water Conservation District is charged with the responsibility of conserving, preserving, protecting, and preventing waste of groundwater within its 16-county service area. The 16-county service area includes Bailey, Cochran, Hale, Lamb, Lubbock, Lynn, Parmer, and Swisher Counties, as well as portions of Armstrong, Castro, Crosby, Deaf Smith, Floyd, Hockley, Potter, and Randall Counties. One of the goals of the conservation district is the 50/50 Management Goal, which is the District’s Desired Future Condition of the Ogallala Aquifer, as set forth in the District’s Management Plan, that 50% of the saturated thickness of the Ogallala Aquifer will still be in the Ogallala Aquifer 50 years late.

I apologize for how much information I provided, and this is just a summary of all the research that I did for Ogallala Commons. I love my internship and learned so much about the Ogallala Aquifer. The thing I enjoyed most about my internship is the fact that I felt empowered by the information that I was learning about the Aquifer. Not only that, but that I was given the ability to help spread this information to the people in the Ogallala region. I feel that through this initiative that I am helping Ogallala Commons with that I am helping make a difference in the conservation of the aquifer and the survival of the region and the people in its communties. One of my favorite experiences during my internship was my harvesting ceremony. I did most of my work alone, in the library or at home, so I really enjoyed being able to spread my knowledge to people face-to-face about the aquifer. It made it more enjoyable how engaged everyone with the Heart of Lubbock Community Garden Association was and all the questions they asked, showing their interest and concern about the water crisis in the Plains and the Ogallala Aquifer.

I hope you enjoyed all the information I have provided and learned a few things. Feel free to email me any question you might have about my research at [email protected]