Driving and walking through and on the outskirts of Goodland has made me notice the things that are commonwealth in this town. When observing Goodland I have found that we are totally and will always be an arts and culture town. It never occurred to me how much art actually goes throughout the city and how much attention it brings to it until I did this exercise.

The first piece of commonwealth I’d like to bring attention to is the large Van Gogh painting in on highway 24 right outside of Goodland. It is the world’s largest painting on an easel. Pictured in it is a vase with three sunflowers poking out, in the past few years the painting has been taken down to be restored to show its original beauty. The great thing about the Van Gogh painting is that it is widely known upon tourists looking for art and is a stop for many people. It can also be seen from interstate, so even people that didn’t know about it, when driving by notice it and pull into town to view it up-close and personal.

The second major commonwealth asset that I focused on a lot is the Carnegie Arts Center. Located in downtown Goodland, its beauty along with the events that go on inside of it bring a lot of people to the downtown businesses and to the surrounding parks as well.

That’s not it though… Throughout Goodland, in every park, there are paintings drawn by local artists sitting upon easels. There is at least one of these paintings in each park in the city making art be spread all over town.

Paintings may not bring a lot of attention to most people, but to artists, tourists, and myself alike, they have brought new aspects of what a small town is capable of doing. Even living in a small town that doesn’t have a lot of money to put towards art, it can still be beautiful because of the great people that live here. This has taught me to never doubt what the people of a city can do. In the future I will respect and enjoy small arts more than I have in the past

The two pictures below are of the Van Gogh painting and the Carnegie Arts Center. The other picture is of my commonwealth map. 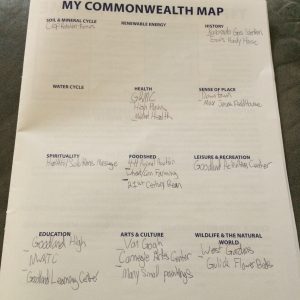 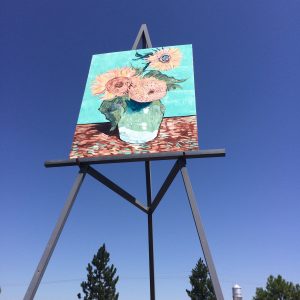 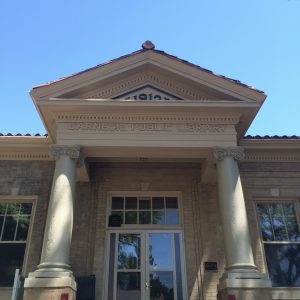