Beginning in June 2013 I started getting know Father Stanley Crocchiola who served as a priest for 13 years in Nazareth.  The former New Yorker came to Nazareth in January 1969.  Out of the many things he accomplished – one was that he was instrumental in getting Nazareth incorporated as a Texas city. 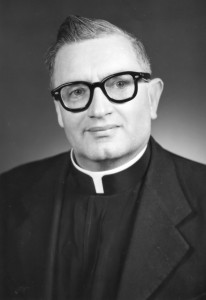 I became fascinated with him for one major reason – he became an accidental historian like me through my research projects from trying to save historical properties to writing about true horrendous murders.  A far cry from me utilizing my master degrees in Environmental Toxicology, Wildlife Biology and Museum Science.

Father Stanley was born on Halloween in 1908 in Greenwich, New York and at age 30 was ordained into the Franciscan Order of Atonement in Washington, D.C.  Due to him contracting tuberculosis it made his ministry on the East Coast challenging and he was assigned to remote Hereford, Texas where the arid climate would hopefully aid his recovery.  In February 1939 he arrived in Hereford by train in the midst of black dust storm that was rolling through the region.  It must have been harrowing for him to say the least coming from the concrete city of New York.  Later, he was sent to Taos, New Mexico and served several missions of Raton, Villa Nueva, Sapello and Pecos.  One evening after he was transferred to Sapello in 1943 on one winter night a parishioner arrived with two horses to take him out on a sick call 14 miles away in a blizzard.

He was an author, artist, and is remembered as a man of great faith and compassion.  His legacy is tied up in the 177 historical publications he wrote after he came to Texas and New Mexico.  It is not clear why he became so interested in history, but he became an accidental historian writing books and booklets on everything from The Texas Panhandle, from Cattlemen to Feed Lots (1880-1970) to The Abiquiu Story in New Mexico.  A majority of his books were just on New Mexico and Texas Panhandle towns.  While at Raton he started spending every spare minute researching and writing.  He published his first book in 1948 on the history of Raton, New Mexico.

How he got back to the Texas Panhandle and started writing Texas history was due to Bishop Laurence FitzSimon of the Amarillo Diocese.  FitzSimon had a deep passion for history and had heard of Father Stanley.  He was intrigued enough to travel to Pecos, NM to meet with Stanley in person.  The Bishop through inspiration of leaving behind several books on history for him to read recruited Father Stanley to work for him and encouraged him to write about Texas and its history.  In January 1952, Stanley became the Amarillo diocesan historian and began researching on Texas history.

In later years he conducted research at West Texas AM University library on his days off of being a priest.  These singular research days became sacred to him, as they do with any historian.  He chose the pen name of F. Stanley.  The initial was for Francis not Father that he took at his ordination as Franciscan friar in 1938.  He often financed his own printing and was frequently penniless.  Never tiring in his passion, his vacations were spent in small western towns gathering research materials for his next book.

In June 2014 I was able to view Father Stanley’s manuscripts that are held at the Amarillo Diocese Museum and Archive.  Seeing his writings in person gave me more insight into how he operated and where he drew some of his inspirations from to help with his research and writing.

Spiral bound books are filled with historical words in his own handwriting with blue ink being his preferred choice.  Three-ring binders and folders hold typewritten pages he wrote at a typewriter.  Most of the typewritten manuscripts are incredibly spotless of errors.  His handwritten books are just as spotless almost as if the words came pouring out of him without hesitation while writing.  Names of books are scrawled in his hand on the front of notebooks.  He outlined every book before he began the writing.  He used cartoons, as well as photographs to inspire his writing.  One blue spiral notebook is titled “Lord of Bubbles.”  It was never published and makes you wonder what indeed the context of the book is about.

He served in the Texas communities of Hereford, Bovina, St. Francis, Canadian, Stratford, White Deer, Lubbock, Friona, Dumas and Pep.  He lived 87 years and gave to Texas and New Mexico history stories and research that are now long forgotten.  He was a man out of time.  In reviews it seems he used a lot of fiction techniques in his writings to help tell the history along the way, which is perfectly acceptable in most historical writings in 2014.  He is one historian I would have loved to have spent many afternoons with…

Photographs of archival materials from the Amarillo Diocese Museum and Archive 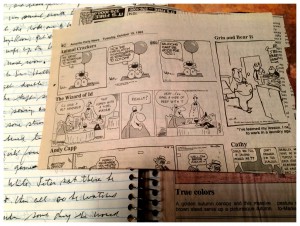 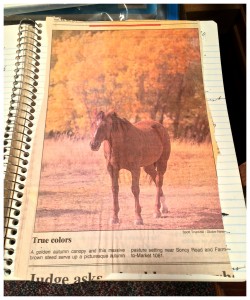 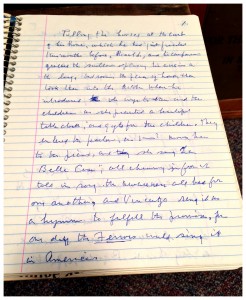 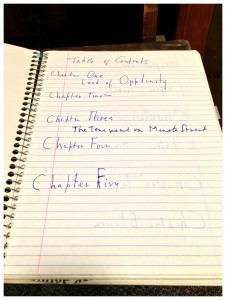 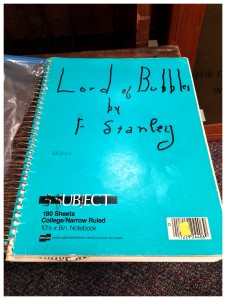 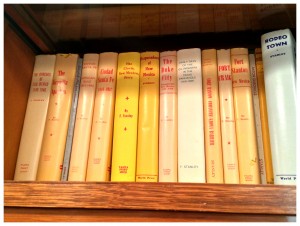 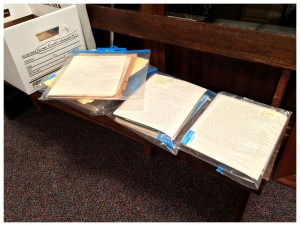 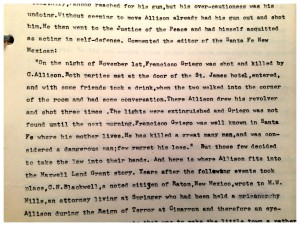 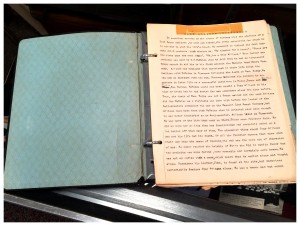 PrevPreviousSummary of experience
NextA Quick ending and a new futureNext