For my community service project, I volunteered with the city-wide effort of the Stuff the Bus school supply drive. On Saturday, July 14, and Sunday, July 15, I stood outside local grocery stores and handed out flyers to shoppers, asking for them to pick up donations of school supplies while they were shopping. If shoppers were so inclined to donate, they gave us their bags of purchased school supplies or a cash donation on their way out.

Working this fundraiser was an interesting window into observing how a community responds to being asked to give. A range of responses were received. There were warm responses, our flyers and explanation of the fundraiser met with smiles, nods, and replies of “Sure, I’ll help.” There were passive responses, shoppers that stopped and listened to what we had to say, then took the flyer with a brief response of “okay, thanks” or simply a nod. There were also occasional negative responses, shoppers that shook their head and said “no thanks” before we even said the word “school supplies.” Others notably chose to walk to the opposite door so they wouldn’t talk to us at all. Overall, Garden City shoppers were generally receptive to listening to what we had to say.

Just as there were varying levels of receptivity to initially hearing about the fundraiser, there were also varying degrees of generosity from shoppers. What was surprising is that often, the shopper you least expected to participate was often the most generous. Many of the most generous donations were given by shoppers that originally expressed passive responses to our explanation of the fundraiser, a classic example of how “a book shouldn’t be judged by its cover.”

This volunteer opportunity allowed me to further the objectives of my internship by providing a candid opportunity to get to know the community of Garden City. Observing the range of initial reactions and generosity of shoppers was an interesting avenue to get to know my community better. 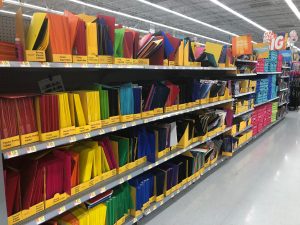