On June 16th, Enrique, Alex, and I brought a school trailer over to the American Legion building, and cleared it out. We parked around back, and were greeted by Kaye Kerr who showed us what we were to do. To make way for the junk we would be carrying out, we repositioned tables, and stowed away chairs. After this, we went into one of the back rooms that was filled to the brim with trash and useless stuff. When we finally cleared that out, we moved on to the ramp and began throwing stuff onto the trailer from there. After three hours everything was loaded, and we drove for another hour or so taking it to a landfill. Once there, we unloaded and headed back to Vilas to unhitch the trailer behind the school. Due to our clearing, the local 4H club was able to repaint the walls and exterior of the building, preparing it for the holiday weekend.

On July 6th, Enrique, and I asked what we could do to help out our school. Mrs. Yocam, our superintendent, suggested that we paint the railing in front of both the school and gym. We waited until early the next morning as to not have the paint dry too quickly in the heat of the afternoon. Rex Crawford, the school’s maintenance, handed us the paint and we were off. In less than two hours the gym’s railing looked as if it were brand new, and the paint had dried very well. Though, this was just the beginning, as the school had at least twice the amount of railing to paint. At this point, we were still preparing for the banquet so we decided it better to go work on that and then finish the railing job in the following morning. 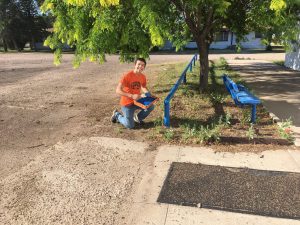 We gathered our supplies once more, and took opposite ends of the rails, as to be more efficient in our work. Once Enrique and I finished painting with blue, we had a small part to paint yellow. Our fellow intern, Alex Suarez, showed up and helped us out with that. The old yellow railing was very corroded, so Alex’s work was for naught, and the paint looked like a horrible, rough mustard yellow. I repainted it at a later date, and we could finally say that we were finished. Mrs. Yocam thanked us, and that was that. 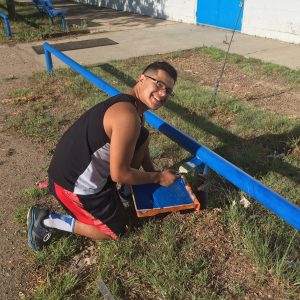 After completing those ten hours of community service, I can say with a smile on my face that I thoroughly enjoyed it. Working with your friends for a good cause creates one of the best feelings that you could ever get because not only are you having fun; you are also improving the quality of life for other people.