The majority of my community service was directed towards the upcoming county fair. The Northwest Kansas District Free Fair in Goodland takes hundreds of hours from people of the community to get the event ready for action. I felt like helping with the fair instead of doing something that doesn’t have as much of an impact on the community because it impacts so many people.

The first piece of community service that I did was pinning and taping up fair flyers all around the community in different businesses downtown and along the highway and interstate. This totaled out to be about 2 hours and 30 flyers.

After I did that I went to the courthouse to the 4H extension office. There I talked to Sherri Kieth, the head of the office, and she set me up making donor appreciation posters for 4H for the upcoming fair. I ended up doing this for 4.5 hours on Friday before I had to go to work that night. The next Monday I went back and finished the posters I was working on and after that started on a new project. All of the donors towards 4H that went on the posters get two thank you cards at the end of fair and the kids of 4H fill the cards out and send them to the donors. What I had to do is look at the list of labels and figure out which ones were left over from last year. Once I had that figured out I had to put two labels on two envelopes and put cards in each of them. It doesn’t sound very hard but it is very time consuming and helped out the ladies in the extension office a lot. I did this for 3.5 hours.

Helping out with things around the community has showed me the amount of stress you can take off of someones shoulders during a time like fair and I will definitely do something like this again. 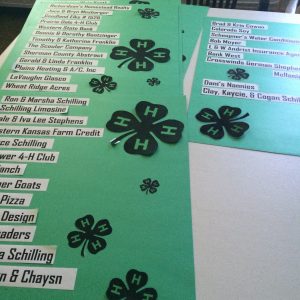 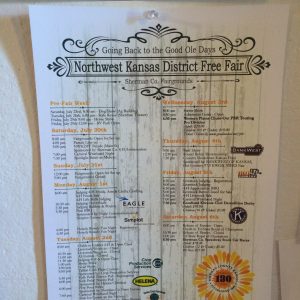