Howdy there folks. This week’s blog post is about our community’s commonwealth assets. Unfortunately, I’m not from my current community, so the commonness of the local commonwealth really isn’t so common for me. After a little digging around, many web searches, and interrupting coffee hour at the filling station, here’s what I found out about Frankfort’s commonwealth.

In August of 1867, 10 men purchased land and laid out a town site, which was originally called Frank’s Fort, but soon adopted its present name of Frankfort. O.C. Horr established the first story in December of 1867. The first baby was born in April of 1869.

The school district No. 35 was organized in March of 1869 in the home of O.C. Horr. Frankfort High School choose its crimson and gray colors in 1905.

Frankfort, despite being a small town, actually has quite the handful of places for leisure and recreation. Some of these places include: the swimming pool, Elsie Grace’s Gift Shop and Fudge Factory, the city library, Lifecare Fitness Center, and for those over the age of 21, the Second Street Bar. 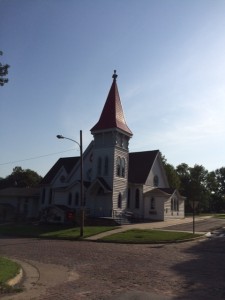 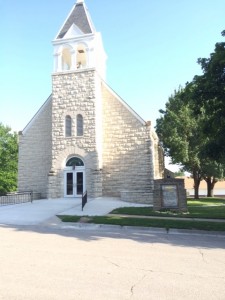 According to the few older men that were kind enough to let me disturb their daily coffee hour at the filling station, their sense of place comes from the gentle rolling hills of the countryside, the gorgeous sunsets over green fields and pastures, and the fact that it’s bound and determined by faith every time you come into town, you either wait for a train as you come in, or wait for one as you’re on your way out of town. Never fails. (This is sadly true. Every stinking time.)

One really neat place to see some awesome paintings on the side of the high school. Also, a really awesome spot for random art findings is in one resident’s lawn. I have no idea who they are, but they have some really cool scrap metal art, including a goat. It’s awesome and I always feel like a creeper when I drive by due to slowing way down and awkwardly staring at their yard.

Many farmers around the area use well water, and those closer to town are on the Rural Water system.

Kansas has some interesting critters, more than plenty creepy crawly ones. (*shutters*) The deer here are pretty friendly too.

Frankfort has a farmer’s market once a week where locals bring in fresh veggies and fruits, along with some baked goods to sell. Frankfort also has a grocery store that is open seven days a week.

Frankfort doesn’t really have much for renewable energy as a town itself, but a few ranchers, my “boss” Dan inparticular, utilize solar energy to run electric fencing for cattle.

This blog post was really difficult, especially when I’m not from the area and really haven’t had a whole lot of time to go explore the community.  Thankfully, I figured out when coffee hour was at the filling station which really helped me learn about this community in a hurry.