The community space I encompass through my work takes me from the little towns of Canyon Lake and New Braunfels to the city of San Antonio. In meeting my needs through work and connecting with friends, I have been able to encompass a much larger commonwealth of resources. For the purpose of keeping it short, I will be focusing on the area where I have pitched my canvas bell tent, Canyon Lake, to relate the twelve tenants of its Commonwealth.

A Sense of Place

Canyon Lake is a very small “Poor Man’s Resort” area surrounding a man-made lake that does not even have a proper welcome sign. Off of 306, one would only see highway signs indicating how many miles they are from Canyon City or Hancock. I first came to the area to go swimming and fossil hunting back in the 90’s and enjoyed being outside of the city of San Antonio. The smell of the juniper trees is how I know I am home. I have always wanted to live in the natural beauty of the Texas Hill Country to be close to water and wildlife. 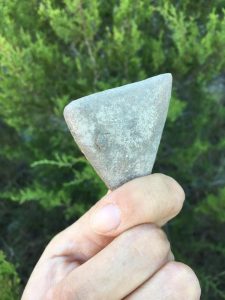 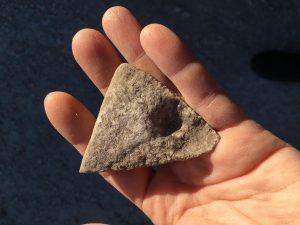 A stone tool we discovered

I very briefly worked as a rural mail carrier and would deliver letters, sports catalogues and packages to the area’s high school named Canyon Lake High School.  The student body is mostly comprised of anglos with few minorities.When attending a friend’s daughter’s graduation commencement, I was surprised and impressed to hear that several of their students would be attending major Ivy League universities. The principal’s speech had been lackluster, in my opinion.  He stated that even though more than half would enter the workforce, or the military and even maybe pursue higher education at a college or university, his advice to the student body had been to never say “No” to a cheeseburger and a cold beer.  I am happy that Canyon Lake does have a newly built library with internet connected computers to help give more access to area residents.

Although Nextdoor.com posts when a mobile clinic comes through the neighborhood, to get proper treatment, one must go into New Braunfels or San Antonio. I have found that San Antonio offers more affordable care and payment options if one does not have health insurance. Many of the residents in Canyon Lake suffer from abusing drugs. Use of methamphetamine is rampant. I sometimes startle when seeing a young adult have a toothless smile or have a shriveled appearance when grocery shopping or eating at area restaurants. Aside from church “interventions” (offering meals for their prayers), and a rehab center in the next town over, there is no real social awareness or outreach for the drug users in the community.

Canyon Lake is known for water recreation. One can boat, water ski, jet ski, fish, snorkel, scuba dive, and just plain swim. The Guadalupe River feeds the lake and is released on it’s southern end where young and old go tubing down a length of it. Up the river, where the river feeds the lake, is used for kayaking and canoeing.  During the cooler weather, bicyclists and runners take over the road’s shoulder, although hard-core enthusiasts can be found enjoying their activity in the sweltering heat.

The soil is mostly made up of limestone/caliche-base subsoil with thin spots of rich soil.  Erosion is a problem in the steep and hilly areas.  Several years ago, a flood carved out its own exit from the lake and created a deep gorge.  Fossil hunters were thrilled when dinosaur footprints and fossilized shells were discovered.

There are many churches in the area but the spiritual place to which I have felt most connected to others has been the Canyon Lake Recreation Center.  They offer a variety of activities for children and adults. This organization has been able to raise money and build a wonderful community garden that helps feed those in need.  Finally, the spirituality of this place-the Canyon Lake area, has “simply” been Nature: the wildlife, birds and bees, etc.; the beautiful waters; the landscape, the Land, and its wonderfully diverse soils;  the mostly clean air (even with its juniper pollen); the wonderful weather; and some beautifully loving people!

Dollar General stores here usually have their parking lots full.  Neighbors enjoy getting a slightly greater variety of frozen and canned foods compared to the local convenience stores. However, the best place to shop for nourishment for our bodies is at Brookshire Brother’s Grocery Store.  Finally, the local community center prides itself for donating produce grown from the volunteer-tended gardens to the local churches and food banks in our community.  (To date the nearest and best Farmers Market is the regular one on Saturdays in New Braunfels.  We do have plans to grow more of our own vegetables and fruit in a “Permaculture” system as we develop our Land in the Canyon Lake area, and do have some honey production going.)

It is sad to say; however, I have not seen even the public have much in the way of “renewable” energy-transformation. I am surprised that there has not been discussion about harnessing and utilizing the power of water when there is a deep lake and well-managed dam in place. There has been an onslaught of new houses associated with the growing population which Central Texas has been experiencing from having so many folk from out-of-state moving into the area.  Unfortunately, I have seen only a small handful of solar panels being installed on new buildings. Like-minded friends and acquaintances do hope to see more developers move towards energy efficiency in the very near future.

There is plenty of natural beauty in Canyon Lake.  This beauty provides opportunities to watch the sun setting over the lake and the dam as well as plenty of chances to swerve your car to avoiding hitting the lovely fawns that dart out suddenly onto the road. The area still has large tracts of undeveloped acreage which is habitat for various wildlife, including native whitetail deer and the exotic Axis deer that can be heard huffing at night.  Some of the critters that I have seen on my property include: spotted skunks, deer, ringtails, turkey, hawks, large crows, song birds (Galore!), snakes, insects which I had never seen before, as well as free-ranging peacocks and their families. The lake itself is stocked with fresh water fish. Turtles can be seen on river banks slipping into the water as you approach them. So far, we have not seen any cougars or bobcats, although there have been reported sightings nearby.  As a plant lover, I am enamored with the local fauna found when looking past the pervasive juniper trees. 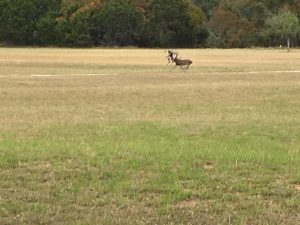 Our noticeable components of our water cycle consists of rainfall and the springs that are found alongside the Guadalupe River. In this area, we are within the Edwards Recharge zone which replenishes the aquifer on which the city of San Antonio and surrounding areas rely.

Our local grocery store, Brookshire Brother’s, offers not only a fine selection of fresh produce which lake dwellers had not been able to have easy access to, but is also offers a space to exhibit local’s artwork. The artwork is placed along the halls of their dining area.  Every few weeks, the artwork switches out from a local high-school paintings, to senior citizen’s stained glass handiwork, or from other contributors and to other themes.  The grocery store also offers live music on their property which makes for a casual venue for musicians.

From what I can tell from talking to the old-timers and reading old newspaper articles online, there had been a long running feud between the towns of Fischer and Canyon City. Both had dance halls and post offices, but when the Army Corps of Engineers were deciding which town to divert the Guadalupe River into so that they could build a dam, Canyon City got slotted for “going under”.  I wonder if the decision was strongly influenced by the power of the townspeople of Fischer?

I have enjoyed meeting my neighbors and reading up on the “going-ons” at the NextDoor website. Everyone seems friendly despite occasional grumblings about there being too many people moving in.  At this stage of my life, I am comfortable being here. If my daughter was still living at home, I don’t think I would have felt the same. There truly are not enough amenities compared to the larger towns and cities to keep a child from becoming TV-obsessed.  (On the other hand, perhaps she would have become Nature-obsessed!?!)  At any rate, my daughter is attending college in one of the densely populated areas in the east coast; therefore, she has her pick of: what cuisine to dine from, people to talk with from other parts of the world and get different perspectives of life, etc. .  As for me, at this time I simply want to build an Earth-bag dome home and set up for my desired more sustainable lifestyle in which to coast into my later years. 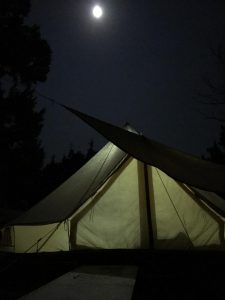