So, as mentioned in the previous blog, nothing about the timing of this internship is normal. Meaning that my first experiences as an OC intern at Vanguard Strategic happened about three months ago. Let’s see how much I remember…

My first task as an intern was to remember to log my work hours and internship hours separately. So far, so good. Then came the big stuff. I had to email and set up interview times with past interns; some my own age, some younger, and some much older. It was daunting, to say the least. Emails, phone calls, or just talking to people, in general, has never really been my strong suit so I figured now is as good a time as any to get better! It worked, mostly. I still don’t particularly like to cold-call or email someone, but I’m getting better at it. I used to wait until John would tell me very directly that I had to email someone then I would religiously write down everything he said to put in the email and still spend a good part of an hour writing it. Not very efficient, I know.

Now, however, when I know I need to get ahold of someone, I can whip out an email just like that (imagine fingers snapping). The other day, I needed information on local radio ad costs, so I sat down and emailed one of the emails listed on the website. It was the wrong person to contact and I didn’t get anything useful out of that first interaction, but it’s a start. Of course, it’s not full proof. Especially on the colder of cold-calls, I’ll wait until John gives me a little more structure for them. But that gives me something to work towards! I’d like to be more confident and willing when it comes to contacting strangers. I could also stand to be more assertive about it too. I’m like the Charlie Brown of talking to people (warning: extreme levels of wishy-washy). It’s not just polite when you need information from someone then give them the option to respond or not. I think (hope) I’m getting better at that too but a later update is in order to determine that.

Considering those are my only problems so far, I think this internship has been going pretty well! 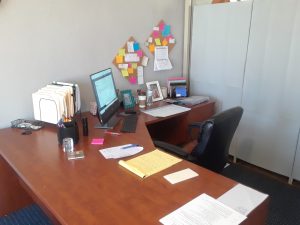