Beef Capital of the World 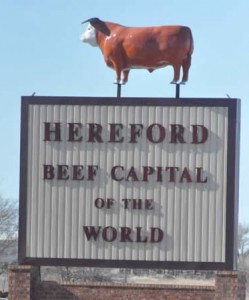 Hereford obviously has a large farming and ranching community, but we are also growing in terms of other commonealth assets. I believe that Hereford is pretty well rounded and offers lots of resources, and I didn’t realize just how many until I went looking for them. Hereford has 8 public schools which are made up of 5 elementary schools, a junior high school, and a high school. There’s also a catholic school called St. Anthony’s. Hereford also has an Amarillo College campus that was built last year. So even though Hereford is a fairly small town, it’s possible to get a good education and even a degree without having to leave town.

You can also visit the Deaf Smith County Library for educational purposes.Our community seeks medical care at one of our 2 clinics, the Hereford Health Clinic and the Regence Health Network, or the visit the Hereford Regional Medical Center which offers many services one may need for their physical and mental health. Snap Fitness, the YMCA, and the Caviness Sportsplex are good places to work on physical health and get/stay in shape in any weather.

For leisure and recreation Hereford has several public parks and playgrounds, an indoor/outdoor pool, a golf course, and a movie theater. Most of these places provide an affordable and enjoyable experience for the whole family. For one’s spiritual needs, I’d say it’s fairly easy to find a church/place of worship if you’re Christian/Catholic. Hereford has several Christian and Catholic churches and churches for many of their sects, but it’s hard to find a place of worship for any of the other major religions.

The Deaf Smith County Historical Museum is a great source for Panhandle history. There’s a historical home in Hereford called E. B. Black house which was built in 1909 and can be used by the community for events such as bridal showers and weddings. Many residents use the house and the garden as their backdrop for pictures. I think it’s a great way to use the history of Hereford for your own special occasions and even contribute to the home’s history. I think that most Hereford residents feel that they do have a sense of place just being in the town. The atmosphere is inviting and there’s not much one has to do to feel like they belong. This is especially easy when most of your family lives in Hereford, so you always have a place to return. Hereford is primarily made up of Mexican and American cultures. It can be seen in the local restaurants and markets and even in the neighborhoods. 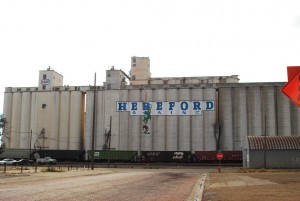 Hereford, like most Panhandle towns, has a semi-arid climate which means it receives less precipitation than the average. Though this might seem like it would make the area difficult to farm, there’s actually a large farming community in Hereford. The farming community depends on irrigation from the Ogallala Aquifer and the saltier Santa Rosa Aquifer. There are several grain elevators around town and dairy farms. Renewable energy is made up of windmills located outside of Hereford. Hereford also has an ethanol industry. Hereford’s name says it all, the cattle industry is by far the largest asset in our community. There are several feedyards around town,and it’s evident that this town was built on the cattle industry; you can smell it in the air.