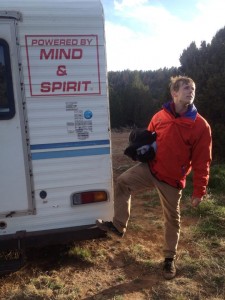 I  am originally from Mississippi.  During High School and some of college I trained and coached a local gymnastics team. During this time I learned about fast-paced management of people.  I did this until my parents needed help with their construction business.  I was hired on as Administrator and worked my way up to Manager.  My weekly task included human resources, payroll, estimating, bidding jobs, and ordering material.  I was involved in this untill the business was shut down due to the decrease in the amount of work available in the area.  I took this opportunity to focus on something that I thought mattered.  While working for my parents I realized that current socioeconomic  models are unsustainable, and I wanted to see what i could do about it.  I calculated that the best and most feasible way I could do something is to start at the  bottom of Maslow’s Hierarchy of needs.  I decided that food production and agriculture was the first step to helping some alleviate some of the socio-economic problems that I have been researching.  I answered a post on an online permaculture forum, that was asking for interns.  I spent from March 2014 to March 2015, working and living at Bodhi Farms, a Permaculture based farm in Las Vegas, NM.  During this time, I learn to put up a high tunnel style greenhouse with a ground thermal storage system.  I also headed a project where i supervised and built a large dodecahedron  style greenhouse/living area. These projects were completed along with basic farm operations and management. Besides major projects,  as an intern I was expected to do sowing, weeding, harvesting, and taking vegetables to the Farmers Market in Taos, NM.  Bodhi Farms took produce to the Santa Fe Farmers market as well as the Las Vegas, and Taos Farmers Market.  I was selling mostly at the Taos Farmers market during the summer and at the Las Vegas Farmers Market during the winter.  In the dead of winter we still harvested 30 to 40 pounds of greens and salad mix. During the peak of the season we were harvesting up to 200 pounds of produce.  After my stay at Bodhi farms was over,  I interned at a farm called Synergy Aquaponics.  I originally wanted to learn about aquaponics at my stay but mostly worked with traditional raised beds.  I did however learn about off the grid living and self composting toilets.  After two months of living and working off grid at Synergy Aquaponics in Tucson, AZ,  I moved to do some volunteer work at Nde Farms on the Mescalero Apache Reservation.  Here I help in the garden and farmer’s market.   I am hoping to help the community become more self reliant and sustainable.